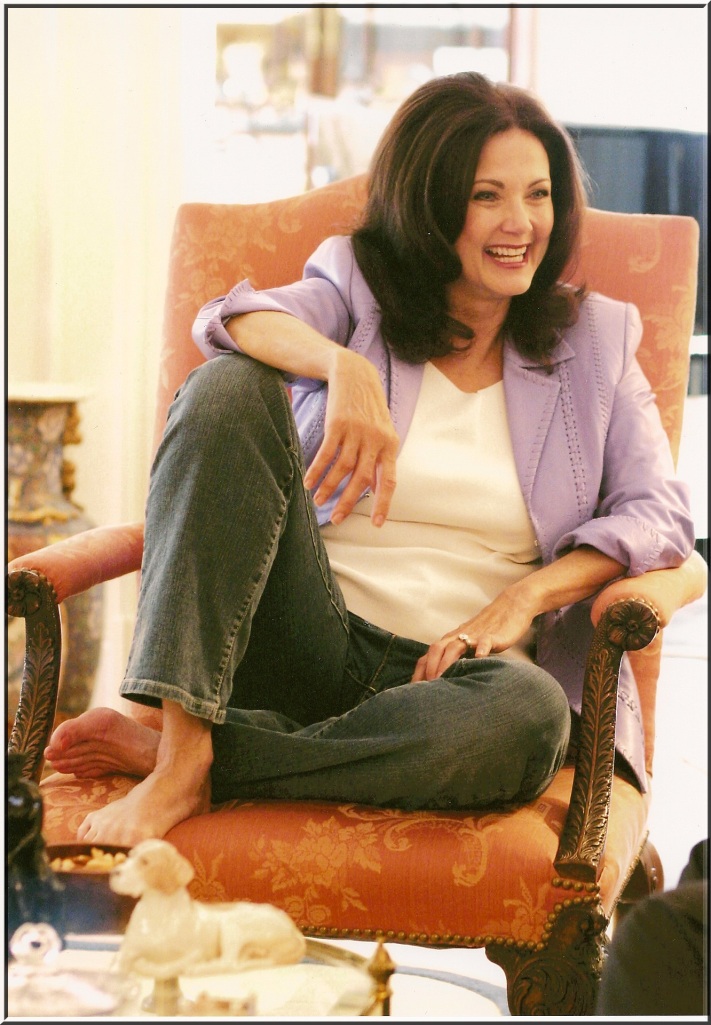 The image of Wonder Woman from the 1970’s was very vivid in my mind as I accepted the job to do Lynda Carter‘s makeup. Aside from Kevin Costner and Hillary Clinton, Lynda Carter is the only other person I was tremendously concerned about getting done just right. Here was the former Miss World semifinalist, Maybelline Model and icon of beauty from her hit show Wonder Woman that I was to make up. I kept saying in my head, “She’s just like your sister….she’s just like your sister….” to calm my nerves. My interest in makeup came at a time when Wonder Woman was popular. And now here I was in the home of this Super Hero.

Approaching me with and iPod bud in one ear and a look of “done this before” in her wayward eyes, I got straight to work on her makeup in her office/bath/dressing room. Next to the bar stool, on the floor was a stack of publicity photos of Lynda as Wonder Woman from days gone by. No pressure. The PR person  let me know that she usually only gives makeup artists 15 minutes tops. Yet, as I set out to bring those blue eyes and gorgeous smile to the forefront, an exchange of understanding and acceptance occurred. After she gave me advice about mature skin needing a dab of cream blush on the apple of the cheeks to radiate youthfulness, I proceeded to give her my favorite DIOR eyeshadow compact for her next taping of Law & Order.
In the end, we collaborated for way more than 15 minutes. I was proud of a job well done. As I left, I glanced on the wall at the framed collection of her Wonder Woman costume and let out a large sigh of relief to know I was able to capture the magic of an iconic character.
To  view the current Maybelline Models go to:
http://www.maybelline.com/backstage/our-models.aspx
Advertisement

Night Thoughts of a Literary Agent

into mind
Making Up America:

Paul Johnson's comedy blog: I didn't get into comedy to be rich or famous. All I've ever wanted was to be loved...by somebody rich and famous.

a day in the life of my sketchbook...

My view on films as I see them. Take it, laugh, share it, leave it. Above all, enjoy!

A books, movies, and more blog from the staff at the Carnegie Library of Pittsburgh - Main.

WordPress.com is the best place for your personal blog or business site.